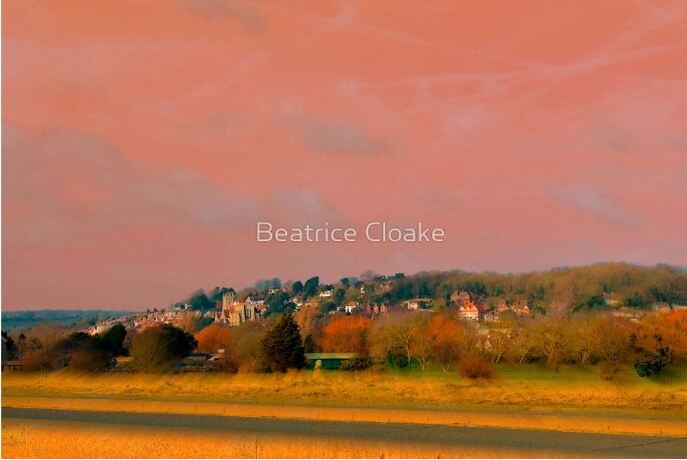 A new comer to Hythe would be impressed by Princes Parade, a long stretch of land that lays from Sandgate to the Imperial Hotel, surrounded on one side by the sea, on the other , the |Royal Military canal.

From the beach, the view towards the hills is of a magnificent vista, taking us to St Leonard's church.

My first impression of the place in 1970, was of an imposing land by the sea and how lucky were the residents of Hythe to have such natural beuaty on their door step. I realised later that in fact, it was the only stretch of green and alone open space for the residents of Seabrook (Part of Hythe).

But!.. I was also dismayed and wondered why such a grand opening was used by the council as the town rubbish tip!
I was then explained it would stop when the gigantic hole would be full.

It has now been for a while. Nature has taken over, the land is now covered with plants and bushes. Most of the grown flora has been established by seeds and transported by the wind.

Birds are in abundance. While I stop along the seafront, I can see flocks of long tail tits, some peewits, white wagtails, sparrows, all of them searching for food.
Keen photographers with long lenses are always searching for the wildlife.
It would be wonderful if we could have a record of all the plants, birds, small mammals leaving on Princes Parade.

Until the beach refurbishment a few years back, force gale wind was sending gigantic waves crashing over the walls, the road and were flooding the land.
Before the great storm of 1987, history tells us of other sever storms. Among some are:

"The Great Storm of 1703 was a destructive extra-tropical cyclone that struck central and southern England on 26 November (7th December in today's calendar) 1703.
High winds caused 2000 chimney stacks to collapse in London and winds damaged New Forest, which lost 4000 oaks. Ships were blown hundreds of miles off-course and over 1000 seamen died on the Goodwin Sands alone. " Wikipedia.

"West Hythe was an important harbour, but like so many of the Cinque Port towns, the sea receded and the harbour silted up. Today, Hythe's beach is about half a mile from the town." (From Open Sandwich Online)

The strong gales have changed the face of Hythe who, once upon a time, as a Cinque Port was constructing the King's war ships.

On the great 2km stretch, along the beach, runners or walkers raise money for charity, fishermen hold competitions, family enjoy strolling with children, cyclists and all kind of activities take place.

On the side of the Canal, there is much to learn about its construction that was at the time  a great historic event and remains an of historical importance as it is a Protected Ancient Monument.

The canal was built to fight a possible invasion by Napoleon, from Sandgate in Kent to Cliff End in Sussex.

"On the 30th October the work began. The first serious setback was in Seabrook millstream under the beach and rampart at Shorncliffe. This trunk of brick and stone was to be 90ft long and 6ft in diameter. Early in the year a storm had threatened to breach the bank and the sea had threatened to inundate the countryside...."

I fully recommend the book "The Royal Military Canal" if you wish to find more about the this incredible construction.

These days we are enjoying its amazing beauty. An incredible amount of wildlife, from swans, ducks, moorhens are nesting along the banks. Herons are finding food. Fish is of the plenty.

Paths along the canal are used by walkers, fishermen (during the fishing season)

I wish it could be used by scientists teaching our young generation how to search and respect our wildlife.

Would it be too much to ask to our Council who has already messed up the land with a tip and is ready to mess it again by removing the tonnes of detritus including asbestos and other harmful toxic waste buried all these years ago with the intention to build houses!

​Egrets have been spotted flying over the canal,  many dragonflies of all kind. butterflies. A huge wildlife.

My heart sink at the thought all of this is going to be destroyed for the sake of a few people, sitting on the Council, (people who have been elected by Hythe Citizens to look after their town) who have decided to built houses. They are going against the views of the population, asking for protection of our heritage.

Democracy is only a word these days!

More news in my Blog ​https://www.beatricecloake.com/blog