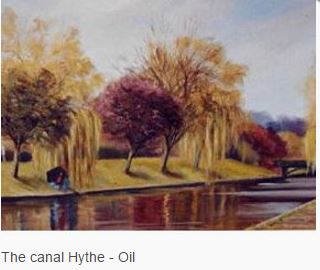 ​If Napoleon had not planned to invade Britain, we would never have been blessed with our beautiful canal. If you wish to find the history of its construction, I can strongly recommend a book written by P.A.P Vine. It is a treasure of references, records, letters and old photos and describes in detail the planning and building of this stretch of water, used by the military to stop the invasion and, at a later date, utilised for commercial purposes. The book even features odd anecdotes, such as the story of a young lady taken by her husband to the marketplace in Hythe in 1805 with a halter around her neck. He sold her for sixpence to a long drummer belonging to the band of the 4th regiment!

From Sandgate to Rye, through Romney Marsh, this awesome 28 mile stretch of water, 5 years in construction, was once upon a time opened to fulfil the distribution of coal, timber and other merchandise.
It was in 1909 that the last barge passed through Iden Lock. It is a shame that it is no longer used for transporting goods, but I can imagine the expense needed to keep the waterways navigable!

So what is there for all of us to enjoy these days?

​From Hythe, the canal meanders through the countryside, passing through the Marsh to Hamstreet where I have spotted swans nesting, herons, moorhens, kingfishers and and abundance of ducks. My family has stopped for many enjoyable picnics in Appledore. Like many parents, we often sat canal-side with our children, waiting for the fish to bite. Any fisherman would relish the challenge of catching perch, pike or carp.

My favourite corner of the canal is West Hythe, where I used to walk our dog. During Springtime, with binoculars, I would watch herons perched on their nests on the top of the tall trees at the foot of Lympne Hill. What a joy to see them taking off and coming back with food for their young. They have such an elegant flight. It is there too I spotted my first kingfisher. My eyes caught an amazing flash of blue and orange and frankly, I thought I had dreamt it!

A few years back, near Scanlon Bridge in Hythe, we had swans nesting right on the side of the footpath, their beautiful cygnets on show for all to admire. Like other artists, I have taken a few photos and had the reward of painting these majestic birds for posterity,

By the bridge in Stade street, Spring is spectacular. I have seen many painters installed with their easels, capturing the cascading new buds of the willows. Underneath the branches, ducks and seagulls congregate, waiting for generous hands to feed them. Summer is the season of fun and joy with the rowing boats from the Ladies' Walk bridge travelling as far as West Hythe, where many enthusiastic cyclists navigate the paths.

Every other year we are spoilt with the most spectacular Venetian fete, known all over the world for its floating tableaux illuminated at night and ending with a spectacular fireworks display. Its origin dates from 1935!

What a wonderful corner of the world we live in!